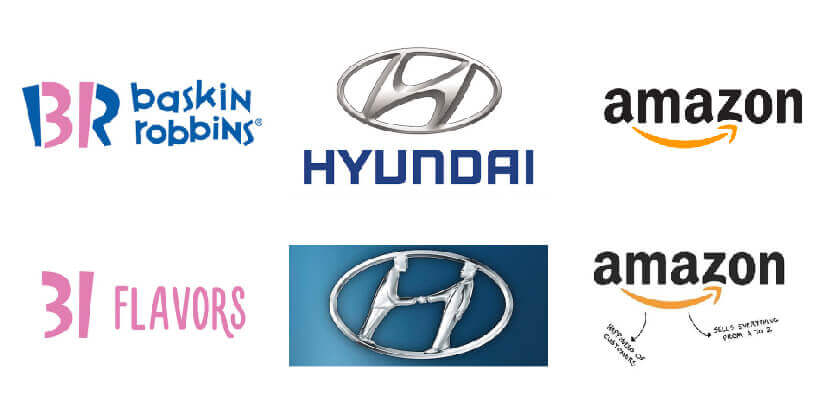 As a leading Logo Design Company in Mumbai, we know that creating logos for brands is a highly creative exercise but has its rewards when people recognize a brand based on its logo and look forward to associating with it. We come across these logos on the street, at shopping malls, on television, we simply cannot miss them due to their eye-catching design and their familiarity. The designer puts in a lot of hard work and creativity.

We are counted as one of the best Logo Design Company in Mumbai and we love to explore the fascinating stories behind the creation of a few exciting world-famous logos. Join us to know more about their origin.

Known for its simple yet striking logo that contains three black stripes and the brand name at its base, Adidas wanted to convey the idea of a mountain peak and what were simple stripes, then turned diagonal on their sides. It portrayed the uphill struggle sportspersons have to undergo to reach the top.

The smiling face on the Amazon.com logo is the first thing that catches our attention and spans across from A to Z of the word ‘Amazon’. While happiness and positivity was its first connotation, it also meant to convey the fact that they sell all the products, from A to Z. This message has been put across in a highly subtle manner and proves extremely effective.

The original logo of Apple consisted of Sir Isaac Newton’s image but that is not why its subsequent logo, the fruit “Apple”, was chosen. Steve Jobs liked the sound is created and hence the name of the company and the logo, while the bite mark was just to give it scale or it would be confused for a cherry. As one of the Best Logo Design Company in Mumbai, we loved the concept and understand why it has become one of the most recognizable logos ever.

The pink-colored areas of the “BR” part of the logo make up the number 31, which is the number of different flavors of ice cream that Baskin-Robbins used to sell.

Beats, a producer of audio equipment which is based in the USA, uses a logo in which the letter ‘B’ looks like a person wearing headphones.

The central part of the BMW logo symbolizes the rotating blades of an airplane, which is in line with the company’s early history of aviation technology, but it is simply a part of the Bavarian flag – the area of Germany where the company originated.

In the logo of the Coca-Cola Company, there is a space between the letters ‘O’ and ‘L’, where one can see the Danish flag. Purely a coincidence, the company has nevertheless used this as a part of its marketing campaigns in the Scandinavian country.

If you hadn’t noticed their logo is somewhat a stylized “T” within a ring, made up of three eclipses. Initially, this logo was debuted in 1990 on Toyota’s American vehicles. According to the company’s website, these eclipses represent three hearts, the heart of the customer, the heart of the product, and the heart of progress in technology.

According to any leading Logo Design Company in Mumbai, Thane, and Navi-Mumbai, this should be a good start for many of the users who have started researching how one can start their website. We assure you to go into further depth in our future blogs such as The Difference Between Web Development and Web Designing or The Importance of Using Split Screen Designs for Websites to learn about more exciting topics.