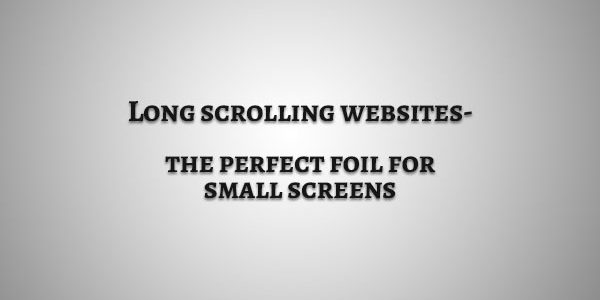 Websites that allow you to scroll down for a long period are known as long scrolling
websites and have been around for a long time. One primary reason for their popularity is
the users love for them. Long scrolling, single page sites that scroll for eternity are becoming
more and more common.
We are a leading organization specializing in customized web development company in Mumbai and
we know that the long scrolling technique is a perfect match for modern web design. For all
those who remember, in the beginning of internet, scrolling was almost taboo. In the days
past, websites were designed like newspapers where the most important content was
meant to be at the top and was called being “above the fold”. It was thought that whatever
was being shown on the first screen would influence the user.
However, with the advancement of CSS and Javascript, more and more options opened up
and websites like Twitter and Facebook came up with single page sites. Marketers soon
realised that users were not averse to scrolling with studies showing that a large percentage
of user’s attention did lie below the fold.
In the present day, high-speed internet is everywhere and social media sites are using
scrolling to showcase their never-ending user content. With the growing population of
mobile phones and tablets, which are increasingly being used to browse the internet,
scrolling did seem the right answer. The smaller screen restricted the amount of information
that can be displayed at one time and also forced web designers to make a choice between
scrolling and shrink-to- fit.
Being a leading web designing company in Mumbai, we make extensive use of scrolling in
the websites we design for our clients. Mobile screens also offer better control and accuracy
while scrolling and there is also a sense of instant gratification for the user.

Emails going into Junk Folder? Here’s what you should do
April 1, 2019

Why do retailers lose sales to shopping cart abandonment?
March 1, 2019